Oxilliah is 28 years old and the mother of four. She is married and currently stays in Lusaka with her husband. Oxilliah was diagnosed with Diabetes Mellitus a few years ago. Because of poor control of her blood sugar levels she started developing cataracts this year in April. The condition progressed so quickly such that by July she lost sight already.

Life without seeing became so tough that Oxilliah could not take care of her family anymore. She could no longer perform household tasks, such as cooking or bathing her children. She could not even handle city life anymore. Her mother brought her from the village they live in, Chikanta, to the Macha Mission Hospital to seek treatment for Oxilliah.

When she came to the eye clinic about 2 weeks ago her sugar level was at 19 mmol/L and her visual acuity was hand movement in both eyes. She could not find her way unless she was aided. Doctors admitted her to the clinic and started treatment in order to lower the sugar. Several days later they sent her back to the eye clinic for cataract surgery.

Surgery in the right eye was done successfully. Her visual acuity on discharge today was 6/8.6 (70%). Oxilliah is very happy and grateful. When she lost her sight she was worried and thought she would lose her husband due to blindness, but because of the successful treatment now that will not happen!

Lately, we have recorded an increase in the number of DM and Glaucoma patients. Meaning we need to prepare ourselves well in these areas as an eye clinic so that we can offer even more in terms of treatment. Treatment for these two conditions mentioned above is not cheap and most community members really struggle financially in order to afford it. Because of that, we still need help from well wishers in order for us to continue touching many lives through eye care services. 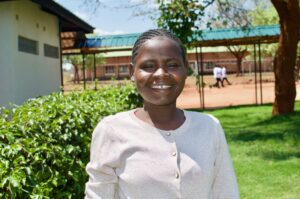 Mwesa was diagnosed with Diabetes Mellitus in 2015 and has since been on diabetic medications. However, his Diabetes has not been well managed and most of the time the sugar levels have been high. Last year he started developing diabetic cataracts. Because of that, he could not go to college where he was accepted to study clinical medicine in order for him to become a clinical officer.

Since then, his family took him to different eye hospitals but they could not operate on his eyes because of the sugar levels which were high. He was brought to Macha eye clinic on 13th July this year and when we did a random blood sugar test, his sugar levels were at 30mmol/L. This is very high! He was admitted to Macha Mission Hospital for about one week just so doctors could control his sugar level. Even after controlling the sugar level, doctors could not do the cataract surgery as they still wanted to monitor Mwesa for a while.

About three weeks later, doctors decided to do a surgery in Mwesa’s right eye. The sugar levels were normal and the surgery was also needed for the sake of them being able to do a fundoscopy as they could not manage to see the retina because of the cataracts.

His visual acuity was only counting fingers. He can”t see letters on the visual acuity chart. Surgery of the right eye was done on 11/08/2020 and his vision the following day improved from counting fingers to 0.80%. The retina looked normal with no signs for diabetic retinopathy yet. A second surgery is planned for October of this year. That way, doctors can continue giving Mwesa post operative treatment up to December when he plans to return to Serenje in order for him to prepare for college next year in January.

Now, treating Mwesa with surgery does not mark the end of his eye problems. He will still need more eye treatment in the future because of his diabetic condition or maybe due to common postoperative complications like macular oedema (oedema in the central retina) and diabetes retinopathy. Because of this, there is a need for more donations and support from our donors in order for us to continue giving good eye care services to people like Mwesa. 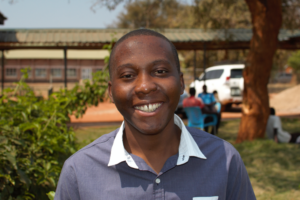